The Bon Ami Project is transformational for Dynamic Mining, for our employees and the local communities that will benefit from the development of the mine through creation of 300 to 400 direct jobs for the Life of Mine during the production phase. During the construction phase approximately 1000 direct and indirect short term jobs will be generated. The Project has been designed for rapid construction; bringing the mine into production in less than 14 months. Targeted with first production in Q3 2023. Initial throughput will be 6Mpta, growing to 10Mtpa within 3 years.

Bon Ami Project is located in Boké district of north-western Guinea, approximately 150 km north-northwest of Conakry and 20 km south of the provincial town of Boké. 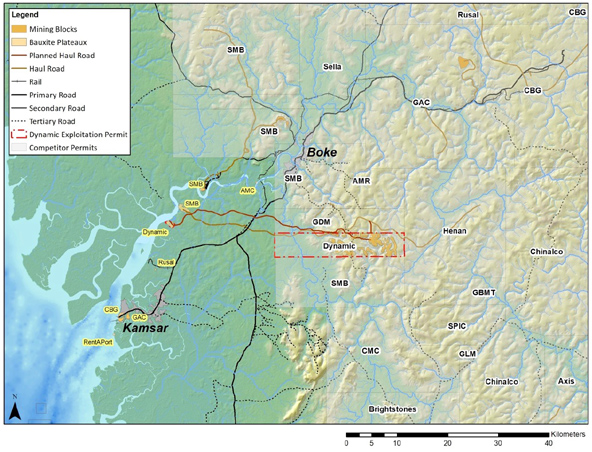 With support from its Shareholders, Dynamic rapidly advanced exploration and Dynamic submitted an Exploitation Licence application for the Boke Project. To support the application Dynamic submitted a Technical and Economic Feasibility Study to the Ministry of Mines & Geology; technical plans to the National Mines Committee and Title Committee; and Social Environmental Impact Assessment (SEIA) to the Ministry of Environment.

Dynamic was granted an Exploitation License for the Boke Project, and renamed it as “Bon Ami” Project.

Dynamic Mining and the Government of Guinea signed a mining convention for the Bon Ami bauxite project. This established the legal and fiscal framework for development of the Bon Ami project which will contribute to the development of the mining sector in Guinea, creation of direct and indirect jobs whilst supporting local development. The project will also generate significant revenues for the Government of Guinea through its direct participation and also direct and indirect taxes. The mining convention was ratified on 5 July 2018 by the Guinean Parliament.

Dynamic Mining subsequently secured a PIN (Project of National Interest) decree granting access rights to the transport corridor – haul road from the mine to the Rio Nunez – and the area alongside the river designated for the barge loading export terminal.

The Bon Ami project will produce Direct Shipping Ore (“DSO”), that will be mined by surface miners transported via a dedicated haul road and stockpiled at the river port. From there ore will be barged to a transhipment zone for transfer to ocean going vessels – Cape size and Panamax vessels.

Dynamic has completed a Definitive Feasibility Study (DFS) for the Bon Ami Project and would start first ore shipment during Q3 2023.